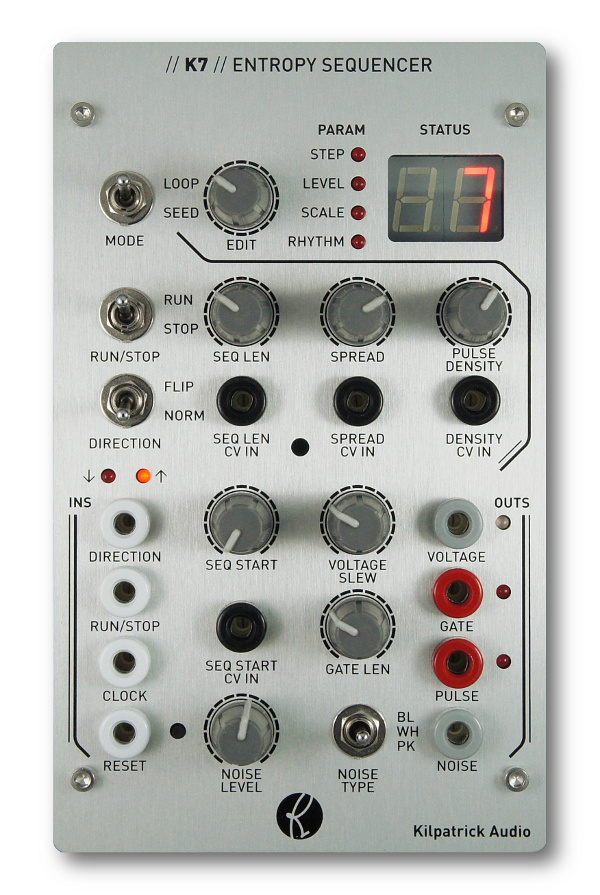 In the quest to revisit sequencers in a totally new way to previous attempts, the entropy sequencer combines an analog noise source with a powerful sequencer to create a flexible and inspiring module that is sure to become an important part of any Kilpatrick Format system.

The sequencer section of the K7 has a flexible step sequencer that supports up to 32 steps. Steps can be edited manually, or seeded from a true analog noise source that is used to generate random numbers internally. The sequencer can be manually started and stopped, and the direction can be adjusted on the front panel. Additionally there are pulse and gate inputs for direction control, run/stop control, a clock input which can be fed from a VCO or LFO and a reset input which will start the sequencer back on the first step.

The random function works by seeding steps with random notes when the MODE switch is set to SEED. The sequence can be looped or individual notes can be seeded as the sequence is playing. Find something you like, and then loop.

The sequencer can also be adjusted to control the length of the sequence, the start point within the sequence, and the range of notes played. All of these controls have both manual and voltage control inputs.

Sequences can also be forced to use a specific scale which limits the notes used. The scale filter fits over the current sequence so that notes are adjusted at playback time. Rhythms are also included which cause some clock inputs to be ignored, thus creating rhythmic patterns.

The output voltage can be slewed to create a portamento effect, and a dedicated gate output has an length adjustment which sets the gate length.

The pulse section creates random pulses of specific density. The density can be both manually and voltage controlled. This is controlled by the running status of the sequencer but is otherwise separate.

Designed as a true analog noise source for the sequencer, we thought it would be useful to offer the noise signal as a front panel output as well. Special analog filters are included that allow either blue (+3dB/octave) and pink (-3dB/octave) output as well as white. The output noise type and the output level can be adjusted on the panel.