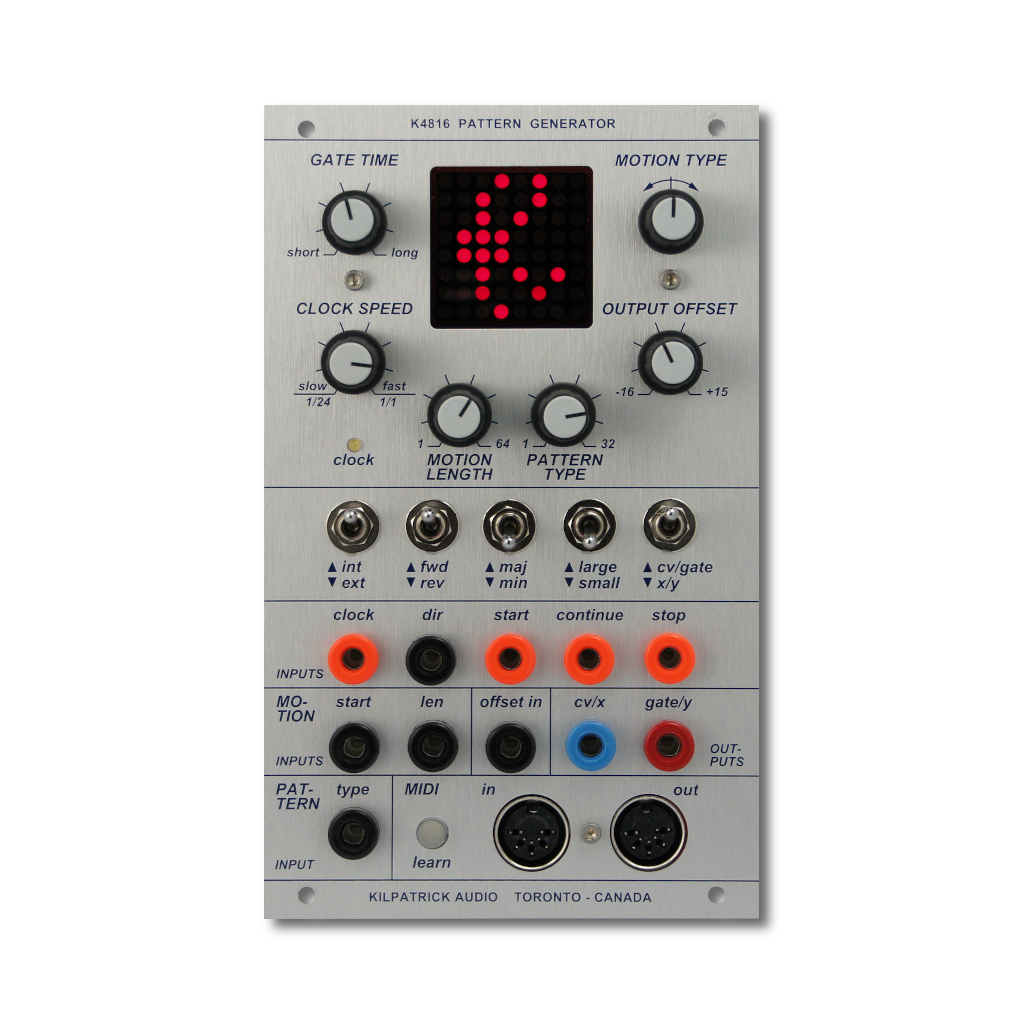 Building on the success of the K4815 Pattern Generator originally designed for Eurorack, the K4816 offers Buchla users this amazing module with a design optimized for this high-end format. The K4816 Pattern Generator by Kilpatrick Audio packs incredible power into a single space module. The K4816 can produce notes and varying control voltages for a wide range of musical and experimental sound applications. Its unique approach to music creation is sure to have you finding new melodies and rhythms never heard before. Unlike a step sequencer, where the player picks each note in a sequence, the K4816 creates sequences by combining a scale, a visual pattern (as shown on the display) and a sequence playback motion to determine the rhythms and notes that are actually played. Other parameters can adjust the note and sequence length, as well as the transposition, direction of playback, and so on.

In addition to features found on the original K4815 Pattern Generator, the K4816 adds new CV inputs: Pattern Type, Motion Start and Motion Length. These allow unprecedented real-time control over the playback position and currently enabled spaces on the grid. The Offset In allows for easy mixing of an external voltage with the CV output for FM and other effects. And the clock Start, Continue and Stop jacks provide pulse inputs for controlling the clock and resetting playback position. You can even control the internal high-stability clock generator via analog pulses or MIDI.

The K4816 is also fully MIDI compatible. With a built-in MIDI interface and extensive MIDI implementation, the K4816 can bridge the gap between analog and MIDI control. For instance, clock control pulses generate MIDI clock messages automatically. And the Motion Start, Motion Length and Pattern Type inputs generate MIDI control change messages on the MIDI out jack, and these parameters respond to MIDI too. You can also use a MIDI keyboard to start, stop and transpose the patterns in real-time and reverse the playback direction. In X/Y output mode you can generate control change messages and stepped voltages instead of notes.

New ways of creating melodies and control signals help to break new ground in music and sound. The K4816 helps you explore new melodies and rhythms using a unique concept of generating patterns. Unlike random pattern generators or ones based on various mathematical concepts, the K4816 bases its music-making foundation on simple scales, visually-designed patterns, and intellectually-designed motions. These three elements can be controlled by the player in real-time to create an enormous variety of sounds. And it is done in a visual way that is fun to use. Everything happens on the 8x8 LED matrix, which is both a visual indicator and a conceptual view of how the system works internally. Scales, patterns and motions are all mapped to points on the matrix, which show in real-time exactly what is happening.

The K4816 concept can be thought of as three distinct layers:

The K4816 Pattern Generator is only available for a limited time. Special thanks to Hugh, wizard Buchla user and collaborator who encouraged and helped to make this special module possible.

Please see the Firmware Updates page for information about updating your module.