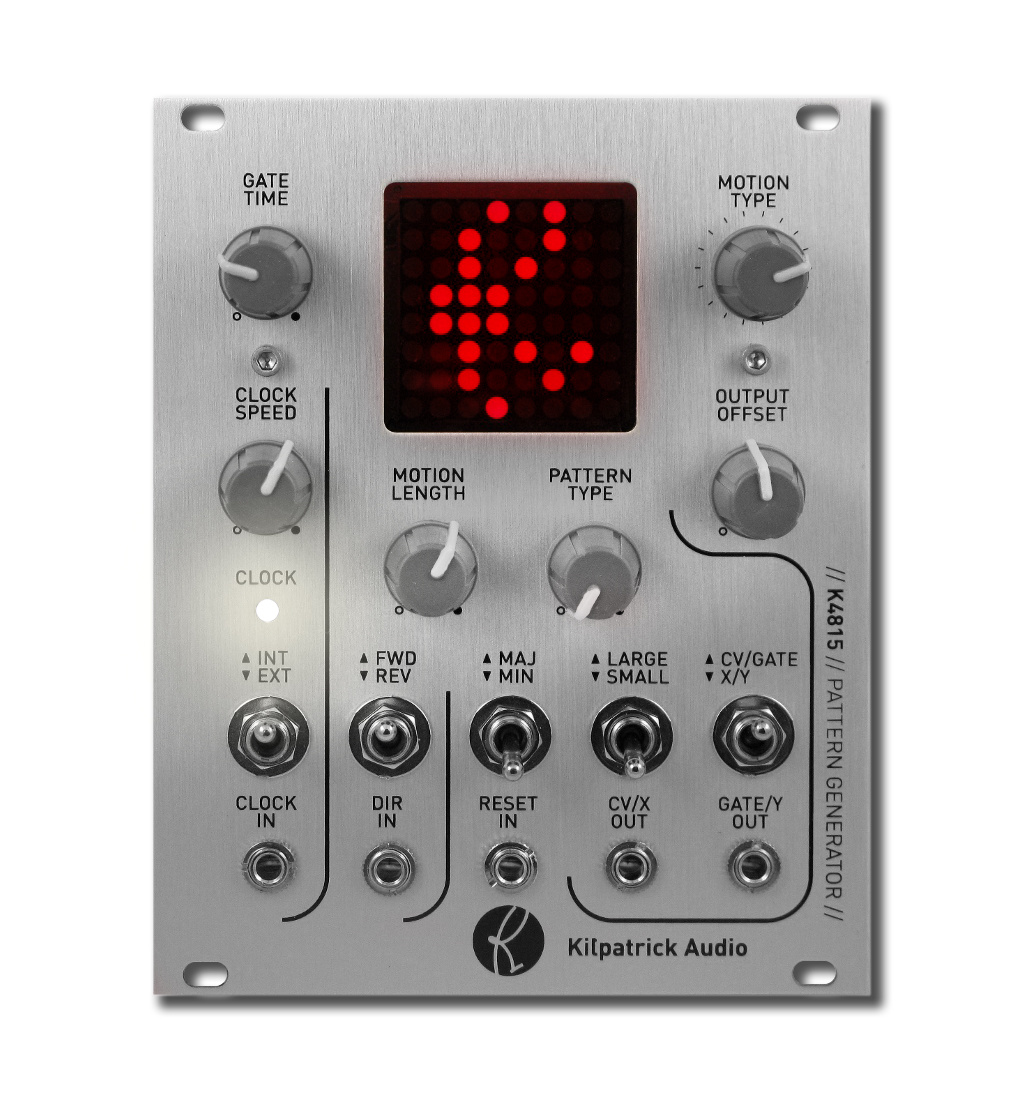 As its premier offering in the modular synthesizer world, the K4815 Pattern Generator by Kilpatrick Audio packs incredible power into a small 20HP Eurorack module that offers virtually unlimited creative potential for modular players. The K4815 can produce notes and varying control voltages for a wide range of musical applications. Its unique approach to music creation is sure to have you finding new melodies and rhythms never heard before. Unlike a step sequencer, where the player picks each note in a sequence, the K4815 creates sequences by combining a scale, a visual pattern (as shown on the display) and a sequence playback motion to determine the rhythms and notes that are actually played. Other parameters can adjust the note and sequence length, as well as the transposition, direction of playback, and so on.

The K4815 is fully analog and MIDI compatible. The MIDI interface is available on an internal connector and is compatible with the K1600 MIDI Converter from Kilpatrick Audio. The analog connections support three inputs for connecting analog clock, and analog control of the playback direction and pattern playback reset. The CV and GATE outputs are high performance analog outputs for controlling VCOs and envelope generators. High quality 12-bit DACs ensure accurate tuning, and jumper selectable voltage offset and trimming are provided internally to allow integration with most modular equipment.

The essence of any sequencer is the clock. The K4815 has a high stability internal clock which can generate a wide range of tempos. The unit also supports analog (5V) clock on the CLOCK IN connector or MIDI clock. When the internal or analog clock is used, MIDI signals are generated automatically, making the system a useful MIDI clock generator or converter.

New ways of creating melodies and control signals help to break new ground in music and sound. The K4815 helps you explore new melodies and rhythms using a unique concept of generating patterns. Unlike random pattern generators or ones based on various mathematical concepts, the K4815 bases its music-making foundation on simple scales, visually-designed patterns, and intellectually-designed motions. These three elements can be controlled by the player in real-time to create an enormous variety of sounds. And it is done in a visual way that is fun to use. Everything happens on the 8x8 LED matrix, which is both a visual indicator and a conceptual view of how the system works internally. Scales, patterns and motions are all mapped to points on the matrix, which show in real-time exactly what is happening.

The K4815 concept can be thought of as three distinct layers:

New firmware for the K4815 is available and can be updated by the user. Please note that most units come pre-installed with the latest firmware. Please contact us with your serial number if you want more info. See the Firmware Updates page for information about updating your module.

Here's a little demo I made when trying out a new video camera. I explain some of the patch to my friend in the background. You can see some external control of the K4815 using a K3020 to control the clock and direction.